We’ll kick off with the quintessential Mexican Street food; the humble, hardworking taco. Constructed of greasy, delicious corn tortillas (preferably more than one per taco and handmade), they’re then topped off with tender meats and the salsas of your choice. Go for a spicy option, although you might enchilarte (literally, chili yourself), or stick with smooth guac. Cilantro and diced onion are essential extras. Alternatively, try a taco dorado.This crispy version should ideally be stuffed with potato and a regional variation can be found in Zacatecas – look out for tacos envenenados. Most tacos start at $1.50 and won’t go above $2.00

Gorditas and sopes are two versions of more or less the same thing. A small, stodgy corn dough snack, gorditas are fried before being stuffed with beans, cheese and meats and topped with salsas and cream. The most common variation of the gordita, is undoubtedly the gordita de chicharrón (pork crackling), although a recent modification is growing in popularity in the Cuauhtémoc borough of Mexico City. The simple addition of bistek warrants the new name ‘mochila’. Sopes are basically the same as gorditas, except the toppings go on the top, not inside the dough, and they tend to be a bit smaller. They’re typical of Culiacá.

Everyone has probably eaten some sort of quesadilla at some point. In their purest form, they’re either a corn or flour tortilla doubled over with cheese in the middle and other additional fillings; chicken, huitlacoche (corn smut), and flor de calabaza (squash blossom) prove particularly popular. Ojo (watch out) in Mexico City though, as they inexplicably never add cheese to a quesadilla as standard unless you specifically ask for it. Don’t end up cheese-less and disappointed. These quesadillas are not like normal American ones these will most likely have the meat filling you want, unlike the average cheese.

Tortas are a staple of Mexican street food and are basically a supersized sandwich, served with squishy bread and stuffed with meats, cheeses, salad, and sauces. You can pretty much get whatever you want in your torta, although there are some special variations you should be sure to check out. In Jalisco, the torta ahogada reigns supreme as the hangover cure du jour. Served with a special, baguette type bread (called birote), it’s typically a pork sandwich literally doused in spicy tomato sauce and topped with fresh onion and cilantro. Then there’s the torta cubana, which includes almost every meat under the sun and isn’t one for the faint-hearted. The Torta Cubana is giant so you may not even finish it so watch out, you may just want to order a normal torta with a minimum amount of meat.

Crispy, salted tortillas are a firm street food favorite, particularly when topped with fresh fish or ceviche, plus sliced avocado and salad. Markets across the country can be found selling these light snacks that are markedly more refreshing than the often meat heavy and greasy dishes that tend to dominate the street food scene in Mexico. However, meat lovers will like Mexico City, as it’s a great place to try tostadas de puerco (pork) or de pata de res (cow foot). If you still want to try the lighter versions, head to the Coyoacán market, which is known for its seafood. They don’t always have to be with seafood, they can be used for many other foods. You can smother them with beans and top it off with shredded chicken and add some lettuce and tomato on top with your choice of salsa. 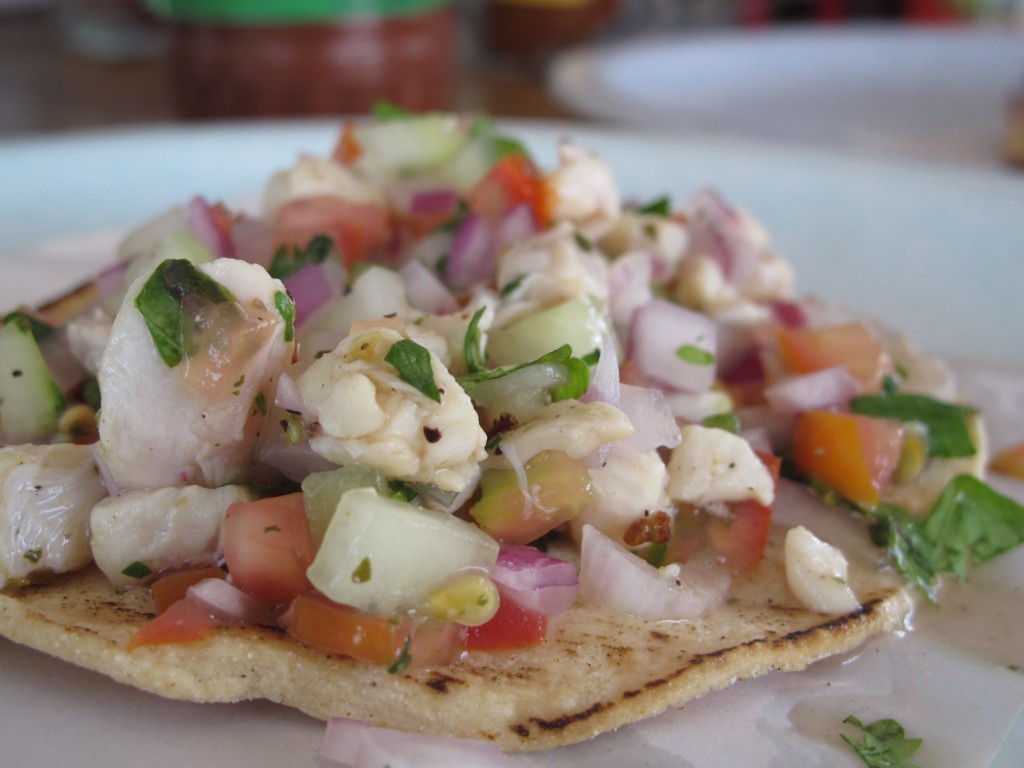